Whose Loss is it Anyway?

This post originally appeared on Studying Religion in Culture, the guest blog for the University of Alabama, Department of Religious Studies site in December 2016. http://religion.ua.edu/blog/2016/12/whose-loss-is-it-anyway/ 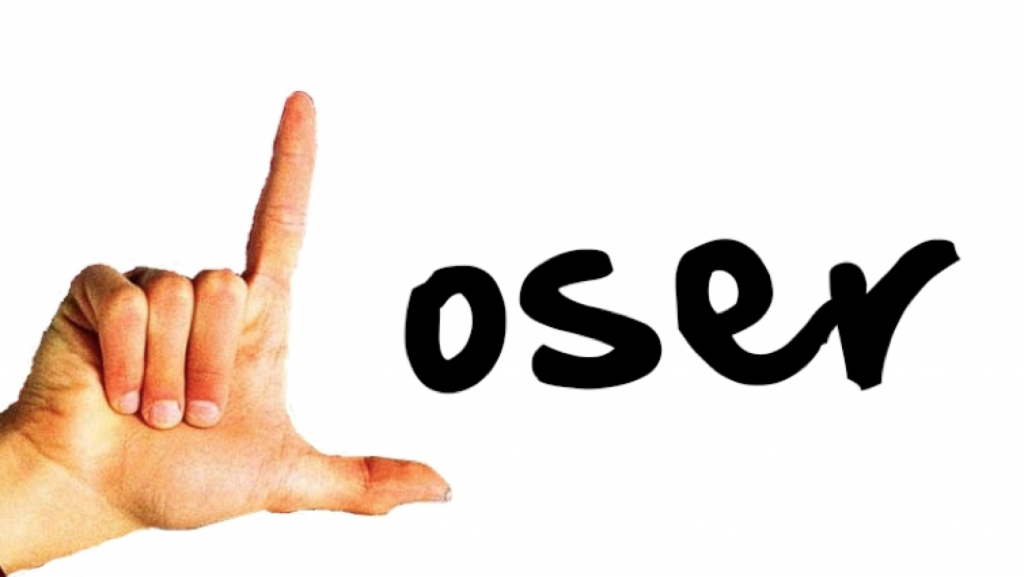 Rebekka King is an Assistant Professor of Religious Studies at Middle Tennessee State University. Her research focuses on the negotiation of boundaries within North American Christianity. She teaches course on Method and Theory, Anthropology of Religion, and Contemporary Christianity.

2016 was the year of the loser. The more you lost, the better you were, especially if you shared it on Facebook.

“I have all of David Bowie’s albums in vinyl. I’m going to post a picture of my collection.”

“I have friends in the UK. Brexit is everything that is wrong with the world. We won’t make the same mistake in America!”

“Leonard Cohen is dead and everyone is posting ‘Hallelujah’ but I’m going to post ‘Democracy.’ See what I did there? I’m not only expressing my grief, I’m also making a political statement.”

“I can’t believe I have to spend Thanksgiving with my Republican uncle, I’m going to ask my friends if we can do Friendsgiving instead.” 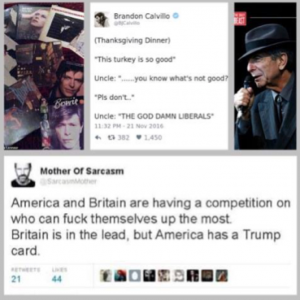 It has been a terrible year for many of us, or so says Facebook, Twitter, Snapchat, and Instagram. We’ve seen the political and the popular entwined in such a way that perceived public tragedies were rendered personal and then projected to an audience comprised of whoever happens upon your social media feed.

Russell McCutcheon has observed that we should be wary of the ‘immediacy’ of #dear2016, pointing out that other years claim the title Annus Horribilis. Likewise, Titus Hjelm reminds us that there need not be a hierarchy whereby taking public note of the loss of Carrie Fisher supplants caring about the massacre at Aleppo. Both McCutcheon and Hjelm invite us to move past the obvious critiques and to think about perspective and performance as animating processes of collective grieving. McCutcheon suggests that losing celebrities deemed ‘too young to die’ might even be a modern rite of passage. And Hjelm notes that criticizing others for caring about the ‘superficial’ deaths of celebrities instead of the ‘serious’ losses in Syria becomes a means of amassing social capital.

While most people recognize that the versions of ourselves we project on social media are fabricated we continue to use it as a marker of important events, as this clip from the Big Bang Show suggests:

Hence, the emergence of phrases such as ‘Facebook official’, ‘pics or it didn’t happen’, and the development of event-specific hashtags (such as a wedding hashtag). In doing so, we police the boundaries of what counts and who counts according to our proximity and distance from events or experiences. Hjelm is right that mourning the loss of a beloved celebrity does not preclude us from recognizing the gravity of true suffering in the world, but I think he is too quick to dismiss those who have created this hierarchy. The naysayers alongside those in mourning reflect a competition of sorts, a race to the bottom.

I began by imagining the self-conversations that may have proceeded a social media post about 2016. While they are fictional, they speak to what was for many a profound experience of mourning and nostalgia. They reflect a personalizing impulse to share why it matters and how the poster’s world is different (i.e., more terrible). It demarcates a specific experience of suffering and shows its fit within the user’s context of family, politics, and personal history.

In a recent article, Cathal Kelly notes that we are nostalgic for a previous era that was ‘great’ (even as commentators point to a discrepancy about when this greatness existed). It is this nostalgia for a brighter past which the architects of Brexit and the Trump campaign capitalized on by promising that those who had lost everything would regain their losses and yield further benefits.

The crux, however, is that in order to win, you had to first admit that you had lost: that you are a loser — a racist in the face of political correctness, an under-employed factory worker in the knowledge economy, a gun enthusiast ignoring school shootings, and a broken family following the Supreme Court ruling to legalize same-sex marriage. And so people lined up. Some went to rallies, but the majority watched the battle lines unfold through their computers and cellphones.

Armed with hashtags and memes, all sides of the debate battled it out on social media.

At the forefront was Facebook. Observing the arguments, we might even be nostalgic for Facebook’s bygone era when status updates began with the word ‘is’ and debates were carried out back-and-forth on individuals’ walls, not a single thread. Those were the good old days of which we are now regularly reminded via the ‘On This Day’ feature, introduced in 2015 to compete with TimeHop. 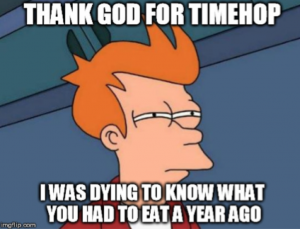 ‘On This Day’ represents an assumption by Facebook that the majority of its users have perusable memories. That’s in part because young people aren’t on Facebook anymore (sure they have accounts that they use to wish their grandma a happy birthday and group chats over messenger, but the majority of teens and twenty-somethings have migrated to Snapchat, WhatsApp, iMessage, or FaceTime). Alongside a decrease in younger users, Facebook is also experiencing a decline in personal content (21% less in 2015, a further decline of 15% this year) — apparently we’re no longer sharing sandwiches. To counteract this trend Facebook introduced new features such as Facebook Live, emojis, big text, and colored backgrounds for Android users.

So yes, it has been a terrible year and we have shared our sadness and outrage with others. As we ‘like’ those updates that reflect our own experiences (on celebrity deaths, politics, what-have-you) and pick fights with others, I see at work a subtle hierarchy of suffering derived from nostalgia: I like Carrie Fisher but not as much as Titus Hjelm and I don’t have any Republicans in my family, so Thanksgiving was fine.

On the surface none of this feels like a big deal. What could possibly be lost or gained in stirring up nostalgia and creating such insignificant hierarchies and divisions? After all, it’s just social media! So be it, if in 2016 we’re claiming some sort of social capital through being the biggest loser. I mean, it’s not like Mark Zuckerberg is running for president.

This entry was posted in Uncategorized. Bookmark the permalink.

The Anthropology of Christianity bibliography blog

Bulletin for the Study of Religion
Practicum: Critical Theory, Religion, and Pedagogy

Culture on the Edge