Matt Sutton who is a regular contributor to one of my favourite blogs, ‘The Religion in American History Blog’, has posted a series of reviews of his summer visits to archives across the US titled “How I Spent My Summer Vacation.” Although admittedly I’m not as studious as Sutton—my summer vacation time is occupied by trips to music festivals in Upstate NY, New England, and Central Canada—but as an anthropologist of North American religion, I find plenty of data, even while on vacation.

This past weekend, I attended the 50th anniversary of the Mariposa Folk Festival on the shores of Lake Couchiching in Orillia, Ontario. The Mariposa Folk Festival was originally established in 1961 as a Canadian equivalent to the Newport Folk Festival (Mitchell 2007: 80). Like the Newport festival, Mariposa was bedevilled by problems with crowd control throughout the late sixties and early seventies. The festival was at one time the biggest folk festival in North America and featured popular headliners such as Joni Mitchell, Joan Baez, Bob Dylan and Buffy St. Marie.

The big-name artists are certainly what draws the crowds (this is equally true today as it has been in the past), but the appeal of a folk festival is the smaller daytime stages that feature ‘workshops’. For the unfamiliar, the workshop usually features several musicians and is organised around a common theme, style of music or type of instrument (e.g. Songs of Protest, Bluegrass Tunes, Slide Guitar). The musicians take turns performing but the expectation is that the other panelists will join in and lend their own styles to each others’ songs.

The folk festival as secular/sacred space, pilgrimage site or Bakhtinian carnival is an easy identification to make, one that, being unfamiliar with the field of ethnomusicology, I’m not sure if someone has already analysed. Instead of opening that can of worms, though, I would prefer to focus my discussion on observations on an overtly religious musical medium re-explored in this secular setting.

Hippie dancing at Mariposa Gospel Music Session (2009)
My favourite kind of participant-observation! I’m in the red skirt and black top towards the front.

That Old Time Religion: Reinterpreted in the New Secular Times

Regular attendees at folk festivals know that the Sunday morning gospel hour is an essential component of the festival experience. At Mariposa this year, the gospel music showcase was hosted by Ken Whiteley, well-known among Canadian folk music fans as the patriarch of the Whiteley family, Canada’s folk dynasty. Whiteley regularly hosts the Sunday Morning Gospel Brunch at Toronto-based roots music club, Hugh’s Room (now that my two years of fieldwork is *finally* over, those in the Toronto area will probably find me there as a semi-regular attendee). This year’s workshop featured Whiteley’s band along with Canadian blues artist Matt Anderson and South African singer-songwriter Liziwe Mahashe.

Whiteley opened the session by singing an old spiritual, ‘It’s Another Day’s Journey (I’m so Glad)”, which he first learned at the Mariposa festival in 1979 from African American gospel singer, Bessie Jones. Anderson followed with another traditional piece. Both Whiteley and Anderson stuck with traditionally religious songs (Whitely also sang his own song: ‘Let My Life Be Prayer’ and Anderson performed crowd favourites ‘Consider the Lilies’, ‘I’ll Fly Away’ and ‘People Get Ready’). Mahashe was the one who brought the themes into the more secular realm by contributing songs of liberation and political freedom from her native South Africa (‘My People, My People’ and ‘Soweto Blues’). For Mahashe, the gospel workshop created a space that was, for her and the audience receptive to a post-colonial critique.

I am often surprised at the popularity of the Sunday morning gospel sessions. The demographic of people who attend folk festival (both in Canada and the US) tend to be white, middle-class, left-leaning individuals between the ages of 45 and 70 (data on those who attend folk festivals in general is available here); they represent the same aging demographic who have in mass departed from organised religion over the past generation or so. In informal conversations I find that the majority of folk festival attendees are resistant, if not completely hostile, to religion, specifically Christianity (to the degree that in the last few years I have elected to tell people that I study anthropology, rather than religion, so as to avoid conversations about how the church/bible/clergy, etc are exclusive/controlling/obsessed with sex/money/power, etc). When religion does come up, most of the individuals with whom I have spoken would be classified as what Robert Fuller calls ‘the spiritual but not religious’ (Fuller 2001), or those whom Wade Clark Roof identifies as ‘Seeker Culture’ (Roof 1993). So while the message of the ‘Old Time Religion’ in terms of its social teachings and its theology has been swiftly rejected by most in attendance, the music itself continues to be celebrated by its mostly non-religious audience. 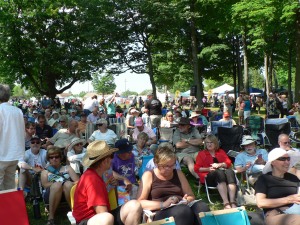 I asked Whiteley on Saturday afternoon why he thought that despite increased secularity and the decline in religious involvement, gospel music continues to appeal to people, particularly patrons at the festival. Whiteley explained to me that he thought that gospel music contains a message that is uplifting, something which appeals to a force that is beyond us and something with which anyone can connect, regardless of their background or beliefs.** Whiteley echoed this sentiment during the gospel workshop by pointing out that the session is intended to be inclusive: “atheists are more than welcome,” he explained, referencing the emcee’s introductory remarks about the strangeness of the gospel music workshop, since he is the only atheist on the Marisposa board of directors. Whiteley went on to declare that not only atheists but also people of all religious beliefs, from Gnostics to agnostics, are welcome.

The Sacred and the Profane: Remixed

The religious rhetoric at the Mariposa stage was light-hearted and friendly. At one point, Whiteley asked for an “amen” from the audience. Later he joked with one of the patrons about starting a revival (although, I wasn’t clear whether it was a folk music revival or a religious one; Mariposa has struggled financially in the past couple of years).
The appeal to inclusivity is of course not surprising for the hippie or folk subcultures that attend folk festivals. In 2005, American singer-songwriter Liz Carlisle wrote her dissertation for an ethnomusicology degree at Harvard on the folk festival subculture at a well-known American Festival, Falcon Ridge (which I also attended that year). Carlisle observed that the host introduced the gospel hour as not being about religion: “This morning’s service is not for any religion,” the emcee announced. “It’s for the spirit.” Later, he explained that “there is only one religion: it’s compassion.”

While not divorced from the theology behind most traditional gospel songs, the message of inclusiveness stands in contrast to some debates concerning authenticity within the contemporary gospel music community. Many traditionalists argue that the emergence of gospel music in the secular realm diverts from biblically based mandates that the sacred and the profane be separated (see Simpson: 18; see also Jackson 2004). They often appeal to epistle letters (e.g. 2 Corinthians 6:14; James 3:12) to argue that the intrusion of secular into the sacred music is a sin (interestingly, similar arguments were made in the nineteenth and early twentieth centuries about the integration of musical instruments into worship services at many gospel and holiness churches).*** The imposed separation of the sacred and the profane dictated by certain gospel music purists is not a position held by all. As Jerma A. Jackson (2004) argues the integration of gospel music into the public sphere served a political purpose through which the Black Church sought to cultivate an image of respectability in the eyes of white America.

Arguments about the place of the sacred in the profane (and vice-versa) are in part what keep scholars of religion employed. My own personal conversations with some members of the folk community suggest that the integration of religion, specifically traditional and exclusive brands of Christianity is not welcome and is deemed to be out of place at a folk festival, which I’ve posited resembles a secular pilgrimage site). But as I and Carlisle observe, the integration of an open, inclusive religiosity is welcome; one that is rooted in traditional Christian theologies but explicitly represents itself as having, along with its audience, transcended specifics of belief and practice.

Notes
* Note to my dissertation committee: I swear I am working on my dissertation, please remember that at my recent review meeting you said it would be healthy for me to take the weekends off.

** I would like to say a special thank you to Ken Whiteley for taking the time to speak with me and for permission to paraphrase our conversation here on The Religion Beat blog. This conversation was the highlight of the festival for me (along with watching Ian and Sylvia Tyson perform ‘Four Strong Winds’ together).

*** A really interesting discussion of this debate and its manifestation in gospel music is available in a sound recording from the 1975 Mariposa gospel session, also titled ‘That Old Time Religion.’ Sound recordings, photographs and other material related to the history of the Mariposa festival are available at the newly launched Mariposa permanent collection housed at York University’s Clara Thomas Archives and Special Collections.

The Anthropology of Christianity bibliography blog

Bulletin for the Study of Religion
Practicum: Critical Theory, Religion, and Pedagogy

Culture on the Edge